Happy belated new year to everyone in the MLBlogosphere! It’s been a pretty quiet last month or so at the mailbox, though I’m happy to report I’ve received three additions to my TTM collection.

Here’s the first one: 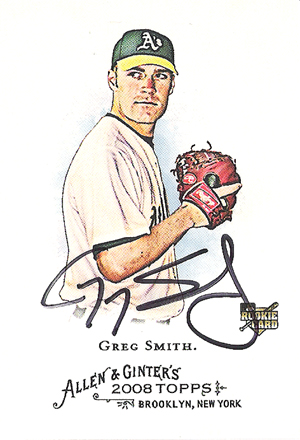 Greg Smith signed this 2008 Topps A&G card for me in about six months, care of the team. I’m happy to have this one back as it’s the 33rd signed card in this set for me.

Former Jays prospect Eddie Zosky signed this 1991 Upper Deck card for me in about two months, care of his home. Zosky’s career never panned out in the big leagues, but this is another cool addition to my Jays collection, which is slowly creeping toward 100 signed cards. 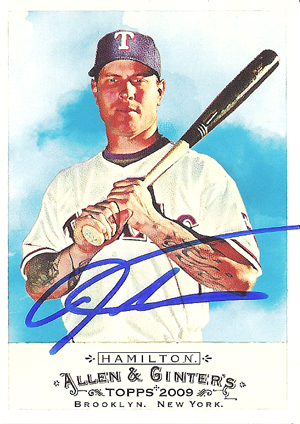 Wow!! 2010 American League MVP Josh Hamilton signed this card for me in roughly six months, care of the team. I am stoked to have this one back! I have one Hamilton autograph in my collection, but it’s a certified autograph card I bought on eBay a few years back. I sent this card to Hamilton during the season and he took it home and signed it this off-season. Pretty awesome!

It always seems to work this way. A day after posting my last entry, in which I explained that I hadn’t received anything in the mail for nearly a month, I went to the mailbox to find a self-addressed, stamped letter waiting for me. A mailday!

I was pretty excited to have something new to open, and even more excited when I could see through the envelope that the card belonged to the 2008 Topps Allen & Ginter set I am collecting.

Former Blue Jays and current Padre David Eckstein signed this card for me in nearly nine months, care of the Padres Spring Training facility. It was postmarked from San Diego, meaning he must’ve taken his mail home at the end of the season to sign. This is the second time I’ve received an Eckstein autograph through the mail, but the first time I’ve gotten him on a Jays card.

Yikes, it’s been a full month since my last mailday posting. Obviously, things have really begun to slow down around here. Anyway, within the last few days I’ve received a pair of additions to my Topps Allen & Ginter collection. One is of a Jays guy, and the other is a pretty unique signature. 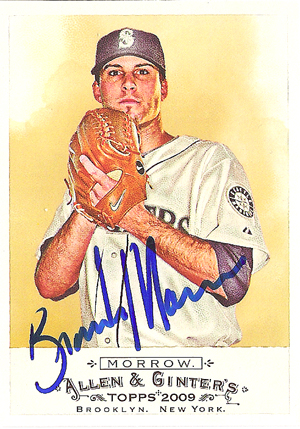 Blue Jays fireballer Brandon Morrow signed this card in about eight months, care of the team’s Spring Training address. This is a 2009 A&G card, and even though it features Morrow in his Mariners uniform, I’m glad to have it back. I like how the blue signature looks on the card, and Morrow had a great first season in Toronto.

David Mantle, son of legendary Hall of Famer Mickey Mantle, signed this 2008 A&G card for me in a couple months, care of Mantle Enterprises in Texas. I was happy to get this one back, to say the least. He added “Son of The Mick,” just as I requested.

Two more cards arrived in the mailbox last week, proving that even though the 2010 MLB season is done, there are still some cards with my name on them out in the wind. Let’s hope they continue to trickle in.

Both cards added to my two favourite collections — my 2008 Ginter set and my Blue Jays set.

Washington Nationals third baseman Ryan Zimmerman signed this Ginter insert card care of his home in about a month. I’ve sent out a few of these insert State cards, and this is the fourth I’ve received back. Zimmerman joins Pat Neshek, Brad Ausmus and Ian Snell as players who’ve signed inserts for me.

Blue Jays play-by-play man Buck Martinez signed this 1983 Donruss card in about six months, care of the team. I rag on Buck from time to time, but I’m glad to have this card back. I think his signature looks great and I like its placement. It’s always nice when a player takes an extra second to place his signature where it looks best (ie: Not on his face!). Over the last few years, I’ve gotten a handful of Blue Jays broadcasters – Martinez, Pat Tabler, Darrin Fletcher and Rance Mulliniks – all of whom were former Jays.

There were few better people in the history of the game of baseball than Sparky Anderson, who died yesterday at the age of 76. A Hall of Fame manager with three World Series on his resume, two AL manager of the year honours and 2,194 wins (sixth all-time), Anderson was inducted into the Hall of Fame in 2000.

But despite his on-field honours, it was his character off the field that endeared him to so many fans. Always seemingly happy to visit with fans, sign autographs and make time for the media, Anderson’s demeanour will certainly be missed in baseball circles. His niceties can certainly serve as a lesson for today’s players and managers — even in a busy schedule, it doesn’t cost anything nor hurt you to be polite and friendly to fans.

Anderson was always a friend to the TTM autograph hobby, and many people took advantage of his kindness in later years. I’m sure there are hundreds of Sparky Anderson autographs on eBay today, because he was a prolific signer. I got Anderson’s signature on a blank index card about four years ago, and even then, it was obvious his health was in decline. I’d hoped to get him on a ball, but wanted to leave the man in peace. He’d done so much for the game and for the hobby. Still, I’m glad to have obtained his signature, and it’s a precious one in my collection.

My most recent signed ball, that of MLB HOF umpire Doug Harvey, is the 50th signed ball in my collection. Not bad, considering I’ve only been collecting signed balls for the last couple years.

Here are some random facts about my collection:

First signed ball: 1989 by Blue Jays catcher Ernie Whitt. After that, I didn’t add another until 2007, so I’ve accumulated 49 in three years.

My favourite: Roberto Alomar. One of my two favourite players as a kid.

Coolest Hall of Fame ball: My Robin Roberts ball is special to me, as he died about two weeks after I received this ball in the mail.

TTM vs. in-person: 41 balls through the mail; nine signed in-person.

Non-baseball signed ball: James Earl Jones, received this summer TTM, because of his role in Field of Dreams.

Best young player currently in the Majors: Baltimore’s Matt Wieters. (Though I hope Toronto’s Kyle Drabek is selection 1a on this list.)

Duplicate signed balls: Two; both signed by Minnesota’s Pat Neshek, arguably baseball’s best signer. I got him TTM and IP.

Coolest inscription: “The Shot Heard ‘Round The World,” added to my ball by Bobby Thomson. He signed this ball about two months before dying earlier this year.

Balls still out there: I’m missing only three balls; one from Toronto’s Jesse Carlson, sent in 2009, and two from Stephen Strasburg, both sent this year when he was signing for a short period. I hope to still get the Carlson one back; doubtful on the Strasburg front.

Hopefully, I’ll get all my balls photographed and uploaded before long. In the meantime, thanks for reading. Looking forward to my next 50!

To mark my 100th entry in this blog, I’ve got a cool addition to my collection to share.

This week, I added another Hall of Famer to my collection. Here it is:

Doug Harvey, a former MLB umpire who was inducted to the Hall in July 2010, signed this ball for me, care of his home, in about two and a half months. Harvey, who’s now 80 years old, is regarded as one of the game’s best umpires. He worked the National League from 1962 to 1992, and was nicknamed “God” by players for his encyclopedic knowledge of the game’s rules. He umpired in five World Series, and was crew chief for two.

Harvey is the seventh current Hall of Famer I’ve added to my collection, and I’m glad to get this ball back.

It’s been a pretty good week at the ol’ mailbox, especially given the drought I’ve gone through this month. Today, I received one more card for my collection. Here it is: 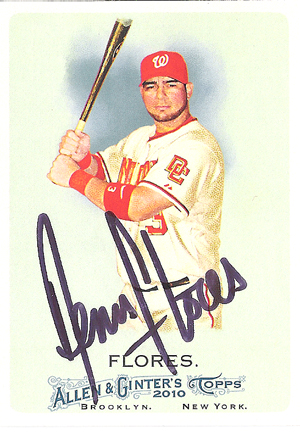 Washington National Jesus Flores signed this 2010 Allen & Ginter card for me in 75 days. Although I sent it to the Nats, it was postmarked from Florida; obviously, he’d taken his mail home after the season and sent it back from there. This marks my fifth signed card from the 2010 Ginter set, and second of a current player. (My others are the former world’s fastest man Ivory Crockett, Negro Leaguer Hank Presswood and bowling champion Kelly Kulick.)

This wraps up a pretty good mail week — three cards in total.

Several months back, I pulled a 2007 Upper Deck Masterpieces card featuring the 1969 “Miracle” Mets. I liked the look of the card, and considering many of that World Series-winning team are good signers, decided to pursue my first ever multi-signed card.

First, I sent it to Ed Kranepool, the Mets first baseman who hit a home run in game three of the series. It came back looking like this:

Then, I sent it off to Al Weis, an infielder who was huge in the World Series; he drove in the winning run in game two, and homered in game five. Here’s how it looked after Weis’ signature:

Recently, I sent it off to Ken Boswell, the team’s second baseman. And it just came back, looking like this: 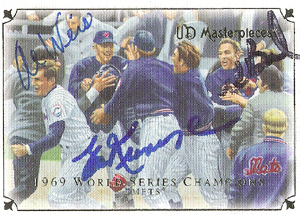 (The Boswell signature didn’t show up all that well, but I’m still pleased with it.)

I’m pretty excited to have three signatures on the card, and soon, it’ll go out again!

It’s been a little while since my mailbox has yielded something exciting, but I’m happy to report I added another card to my signed 2008 Allen & Ginter collection.

Wily Mo Pena signed this card for me in about four months, care of his Independent League team, the Bridgeport Blueclaws. I am pretty happy to get this one back for a couple key reasons:

a) Pena is a tough signer at times, and sometimes, former Big Leaguers playing independent ball aren’t all that thrilled;

b) A couple months after signing with Bridgeport, Pena was signed to a Minor League deal with the Padres, so he wasn’t in Bridgeport very long.

This success marks the 30th ’08 A&G card I’ve added to my collection. Of these, 22 are baseball players, and eight are different “champions.” I’ll scan the non-baseball ladies and gentlemen and post them here at some point soon.